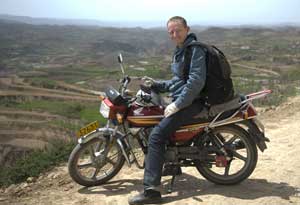 Gilles Sabrié, photographer, is based in Beijing since spring 2006. Gilles Sabrié first worked for television in France and in United States. Based in New-York, he then became consultant, specialized in television channels creation, programming and promotion. At the same time, he carried on his work as a documentary photographer. He travelled almost everywhere in the world, most specifically in China, India and South Africa. His photos have been published in various newspapers and magazines, such as Newsweek, Time, US News, The New-York Times, L’Express, Focus, Le Point, Libération, Courrier International.

In 2005, he decided to leave television and to dedicate his time to his passion, photography. Fascinated by China, he settled in Beijing in early 2006. Among his most recent essays : 175 M, or the Three Gorges Dam, The Mingong, Traveling Opera, Faces in Beijing Subway.

Nineteen photos were selected. Limited editions, printed by Gao Lei, and signed by Gilles Sabrié, are being sold to the benefit of the association. (To see the photos, click here)

Sizes and prizes of the photos :

The DVD of the multimedia projection is also for sale: RMB 100.
Thanks for making cheques and payments to the attention of ” Les enfants de Madaifu “, 9 rue Rataud, 75005 Paris In case you’re interested and/or wish to buy photos or receive more information, please do not hesitate to contact us by mail. click here

In April 2007, Gilles Sabrié went to Gansu and Shaanxi to meet the children taken care of by the Assocation. He travelled deep in the mountains, in some of the most remote villages, where outcasts of chinese economic miracle live.

” The memory I keep is the one of this little girl, whose look was not the carefree one of a child, but the grave one of an adult whose life has been tough “. The little girl, Tan Xiaofang is 10 years old. Her father is mentally handicapped and her mother left them. She lives with her grand-father, almost blind and deaf, and her grand-mother, in the village of Shanmen. ” There was also this teacher, who couldn’t get his diploma because of the cultural revolution and was working very hard for 150 yuan per month”. The teacher, Lei Shi Xiang, has been in Guanshan primary school for 25 years. He is thinking of leaving the school to try to find a job as a migrant worker in a big city.

All these touching memories have been caught with a lot of grace and sensibility by Gilles Sabrié’s camera.